Let’s take a trip back in time to America in the in the early-to-mid 1900s. Nationalism is flourishing as a result of the US military’s participation and success in both world wars. FDR’s New Deal and World War II have helped the country survive the worst economic downturn it’s ever faced in The Great Depression. Women’s suffrage leaders like Susan B. Anthony and Elizabeth Cady Stanton are fighting to give females a voice, while flappers are protesting social norms of “ladylike behavior.” And prohibition has forbidden the manufacturing, sale, and transportation of alcoholic beverages, causing a widespread disregard for authority and, most notably, a massive increase in organized crime.

History has it that The American Mafia was as powerful as ever during this era, profiting off a plethora of underworld activities, such as loan sharking, prostitution, smuggling, and racketeering to name a few. At its peak, it even had its dirty hands in labor unions and legitimate industries like construction, hospitality, food service, and clothing. It was at its peak. It was on top of the world. Yes, The American Mafia is one of the most fascinating syndicates that’s ever existed, which is why the entertainment industry has extensively explored it in movies and television. However, the same can’t be said about video games, which is a crying shame.

Lately, I’ve been spending my gaming time begrudgingly slogging through Mafia III. While I try to refrain from speaking negatively about games, I can’t help but profess my profound disappointment with it, especially considering how long it’s been since a great mobster game was released. However, while my playthrough has been less than enjoyable, some positives have come from it. One of them being a reminiscence of the great gangster games I’ve played in the past. And while there aren’t many, unfortunately, the good ones have left a lasting impression on me.

From Tommy guns and Molotov cocktails to fedoras and pin-striped suits – here are my favorite mobster games of all time: 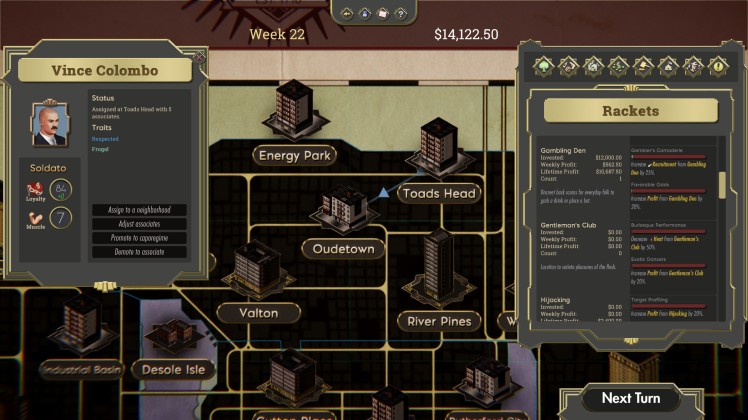 Released in 2018, The Commission: Organized Crime Grand Strategy is the most recent game on this list. Set during the 1930s in the fictional city of New Shore, a virtual metropolis modeled after New York City, players are given a choice act as Don of one of five families: Bogiana, Calessi, Junio, Rocca, and Donano. While the game doesn’t spell it out for you, the goal is to ultimately destroy your rivals and take over the city without dying or being arrested. Gameplay is turn-based, meaning you handle a variety of tasks and responsibilities – from building and managing assets to planning the capture interrogation points and orchestrating hits on rival bosses – until you’re ready to end your turn and fast forward to the next. During this simulation, other families make moves, your plans are executed, and your rackets generate profit.

To make the most of your assets, you need to place them in appropriate neighborhoods. For instance, if you’re looking to establish a gambling racket in a highly populated, ritzy area, a high-end casino will be more successful than a seedy underground gambling den. Likewise, a labor union racket will be more effective in a lower-income area than a wealthy one. The wide variety of rackets and how they perform in each neighborhood adds another layer of strategy that makes you constantly analyze and tweak your investments. If you’re looking for action, this isn’t the game for you. But if you’re craving a taste of what it’s like to manage and grow your own Mafia family, The Commission: Organized Crime Grand Strategy is one of the best simulations on the market.

Much less disappointing than its successor, Mafia II puts you in control of Vito Scaletta, a war veteran turned Mafioso who seeks to earn enough money to pay off his father’s debts. Set in the fictional city of Empire Bay (also modeled after New York City) during the 1940s and 50s, the game takes you on a journey as you work your way up the ranks of the Mafia during its heyday. The combat is exciting and mechanically sound, but the story is where Mafia II shines. In addition to being extremely cinematic, it’s well written, exploring themes such as family, friendship, loyalty, and betrayal.

While the combat and storytelling is top-notch, the world design is lacking. 2K Czech did a fabulous job capturing the spirit of the mid 1900s with weapons, cars, apparel, and licensed music from the era, but it failed to make the world it built full of life or worthy of exploring. It looks nice, but there are few side missions, activities, or NPCs to interact with. Be that as it may, it’s one of the most authentic mobster games ever released, so if you have an itch to virtually walk in the Italian leather shoes of a wise guy, it’ll scratch it.

Throwing it back to 1998 is Gangsters: Organized Crime, a strategy game that was the primary influence of the aforementioned The Commission: Organized Crime Grand Strategy. However, instead of being entirely turn-based, some parts of the game are played in real time. As a power-hungry mobster, you want to expand your organization as much as possible so you can extort more businesses and recruit more hoods (gang members) to do your bidding. Skillsets of these underlings vary, making some better at completing certain tasks than others. For example, if you want to rough up a rival gangster without killing them, it’s better to send a hood with high fists skills and low knife skills. Similarly, if you want to gain intel on an enemy without being noticed, it’s best to send a hood with a high intelligence rating.

There are three victory conditions and each varies in difficulty. You can either go straight by getting a good lawyer and building a purely legal business empire; get elected mayor by earning the affection of the people, having a lot of money, and capturing a large amount of territories; or dominate by destroying all rival gangs and taking complete control of the city. One of my favorite aspects of the game is how careful you need to be to avoid heat from the police and FBI. If your revenue stream consists of a lot of dirty money, hiring an accountant can help you launder it. Accountants can also audit your businesses and shed light on any earnings being stolen from non-loyal employees. Likewise, lawyers can keep your hoods out of jail if they’re busted committing crimes. Even after 20 years, the level of detail is unmatched, which is why it’s still the best and most comprehensive Mafia strategy game ever made.

Fun fact: Mafia was the first game I ever played on PC. That alone makes it incredibly memorable for me. At the time, it was one of the most realistic open-world video games. For instance, police book you for traffic violations such as running a red light or causing a collision with another vehicle. Nowadays, I would find that incredibly annoying, but as a 12-year-old kid, I thought it was the coolest thing. Equally realistic is the damage physics on cars, with vehicles deforming in real time. Windows can be smashed, fuel tanks can be punctured, and tires can be popped. Combat also feels authentic, allowing players to use common firearms from the time period, such as the Mosin-Nagant 1891 rifle, Smith & Wesson Model 27 magnum, and, my personal favorite, the Colt 1911 handgun.

Mafia’s narrative revolves around Tommy Angelo, a former taxi driver that becomes a soldato in the Salieri family and quickly rises through the ranks. In terms of storytelling, it is the best in the series, taking you on a journey through Tommy’s rise and fall as a Mafioso. To accompany the fantastic storytelling is a sprawling open world that features both a dense urban environment and an expansive countryside. Named Lost Heaven, the city is filled with over 51 classic American cars, as well as notable landmarks from real-life cities like New York, Chicago, and Los Angeles. Despite being almost 20 years old, it still holds up as the clear best installment in the series.

No game based on a movie has done as good of a job capturing the spirit of its cinematic counterpart as The Godfather. It starts with you completely customizing your character, and then it plops you into the world of the most iconic mafia film of all time. The story intelligently intertwines with events from the movie and has you participate in some of its most well-known moments. For example, you’re the one who plants the gun in the bathroom of Louis Restaurant so Michael can retrieve it to kill Sollozzo and Captain McCluskey. Additionally, you’re the one who helps Rocco Lampone put the severed horse head in Jack Woltz’s bed. To add to the authenticity, James Caan, Abe Vigoda, and Robert Duvall provided their voices, and Marlon Brando even recorded a new line of dialogue shortly before he passed away.

Complementing the fantastic narrative is an expansive open world, styled after mid-century New York City, and some exhilarating gameplay. Extorting businesses is hands down my favorite side activity, allowing you to intimidate merchants through a variety of methods – from beating them to destroying their goods – to convince them to pay you for protection. I also love the aspect of taking over and controlling turfs from rival families, and then defending them from retaliation. There are also some light RPG elements represented in the game’s “Respect” system. The more “Respect” you earn, the more points you get to increase your speed, health, fighting, shooting, and street smarts. Lastly, I love seeing your character’s progression up the ladder of the Corleone family. You start off at the bottom as an Outsider and work your way up to Don of New York City. There isn’t a better mobster gaming experience available, and I hope a similar game is made again someday soon.

Have you played any of these games? Did you like them? Do you also feel like the world is due for a new mobster game? Share your thoughts in the comments!