After being inspired by other bloggers in the community, I decided to start a series of posts covering everything I’m into each month. This includes what games I’m playing, what movies and television shows I’m watching, what music I’m listening to, and (occasionally) what books I’m reading. It’s a fun exercise that not only gives me an opportunity to write about everything I’m currently enjoying, but also gives you some insight into what I enjoy so you can learn a little more about me.

From chasing the perfect assassination to coffee-drinking comedians, here’s what I’m into this month:

This is the only game I’m playing at the moment. I’ve become obsessed. At first, my goal was simple: Obtain a Silent Assassin ranking on each of the game’s six missions. I’ve since turned things up a notch. Now my focus is breaking into the top 1,000 on the global leaderboards for each mission.

It’s reminiscent of when I spent many sleepless nights achieving an S ranking on every mission in Metal Gear Solid V: The Phantom Pain. After playing through the same scenarios so many times, you begin to see things more clearly and pick up on little clues that help you complete objectives more efficiently. It’s like a big, sophisticated moving puzzle that reveals its answers to you the more time you spend with it.

Who knows how far I’ll go with my obsession with Hitman 2? In addition to my goal to rank in the top 1,000 on every mission, I’ve been working towards completing all of the Escalations, stories, and challenges. Hell, I’ve even toyed around with creating my own assassination contracts. The possibilities are seemingly endless with this game. Clearly, I’m thoroughly enjoying it.

What I’m Listening To

This is How you Smile – Helado Negro

I never would have guessed that my favorite album of the year so far would come from a guy whose name translates to “Black Ice Cream?” Apparently, Helado Negro (Roberto Carlos Lange) has been making music for quite some time, but I never heard of him before listening to the sensational This is How You Smile. What I love most about this album is the vocals. Lange is by no means a great singer, but there is a certain sincerity in his voice that warms my heart, especially when singing about relatable topics like childhood, siblings, parent/child relationships, partnership, and old friends.

“Please Won’t Please”, the opening track, is one of my favorites. A minimalistic drum beat and flickering synths set the perfect tone for Lange’s emotive, baritone vocals as he sings “will anyone rescue what’s left of me?” I’m also quite fond of “Pais Nublado, a dreamy acoustic guitar-driven number with a Latin flare. It has some passable moments, but all in all, This is How You Smile is one of the only new records that I’ve listened to on repeat this year.

Animal Collective is my favorite band, so I’m a little biased towards anything the group and its members release. While I’ll admit that Buoys is Panda Bear’s weakest record, I still like it; much more than other people from what I’ve read and heard. The entire album, particularly the opening track “Dolphin,” is a pleasant reminder of how beautiful Panda Bear’s vocals can be. I’ve grown so used to him smothering his voice with effects that I forgot how nice it sounds without them. This is the most natural his music has sounded since Young Prayer, and it’s a nice change of pace.

For this project, he reduced the amount of layers he uses and changed his songwriting process, resulting in minimalistic instrumentals that heavily rely on simple acoustic guitar strumming. It’s jarring, but it’s grown on me after a few listens. One of the reasons I love Panda Bear and the other members of Animal Collective is because they’re always pushing themselves to create something new. No two albums sound the same. With Buoys, in particular, his goal was to make it “familiar to a young person’s ears.” I wouldn’t consider anything he’s ever done to be “familiar,” which is why he is such a great artist.

These three singles are slated to be on Avey Tare’s upcoming record, Cows on Hourglass Pond, and I’ve become enamored with all of them. I haven’t been this excited about an Animal Collective-related project since Deakin released the remarkable Sleep Cycle in 2016. Avey is getting back to the basics and focusing on what makes his music great, and I’m absolutely loving it.

“Saturdays (Again),” my favorite of the bunch, sweeps you away with its jangly guitar riff and relatable lyrics about fondness for Saturdays. Founded on a gorgeous, metallic synth loop, “Taken Boy” is a dreamy, psychedelic trip through youth. Lastly, “HORS_” is catchy and upbeat, cleverly leveraging a sample of trotting horse hooves to keep the rhythm. Cows on Hourglass Pond releases Friday, and if the rest of the songs are anything like these singles, it’ll be my early favorite for album of the year.

Sadly, a stupid controversy around the title of this song and Mac’s upcoming album have distracted people from the music. The song is good. Damn good, actually. Its somber, minimalistic instrumentals comprised of simple acoustic guitar plucking and either a droning synth line or distorted horns (I can’t tell which) create an eerie vibe that perfectly complements the dejected lyrics. “There’s no turning back to nobody” are the lines sung in the chorus, meaning Mac has crossed the line of no return in terms of fame. He can never be a “nobody” again. He is forever trapped as the “creature on television,” “pretty picture,” and “superstition” he sings about in the song. It’s beautiful stuff and I’m excited to hear what the rest of the album has in store.

Comedians in Cars Getting Coffee

Jerry Seinfeld is the man. Only he can pull off a show about bullshitting with other comedians in fancy cars while grabbing coffee. He’s successfully created another hit show about nothing. The guy is a savant. Over the past few weeks, I’ve become obsessed with Comedians in Cars Getting Coffee, nearly binging all of its 72 episodes. They’re short, entertaining, and incredibly interesting.

I love seeing the famous guests take off their masks and show their true personalities. Learning about their creative processes, early career struggles, and lives outside of work is truly fascinating. My favorite guests thus far have been Mel Brooks, Don Rickles, Steve Harvey, Tina Fey, Julia Louis-Dreyfus, Judd Apatow and Michael Richards. I was extremely disappointed in the Christoph Waltz and Amy Schumer episodes. Waltz came off as kind of a prick and Schumer was surprisingly boring. There are also a few other duds, like Joel Hodgson and Ali Wentworth, but for the most part, the show is great. 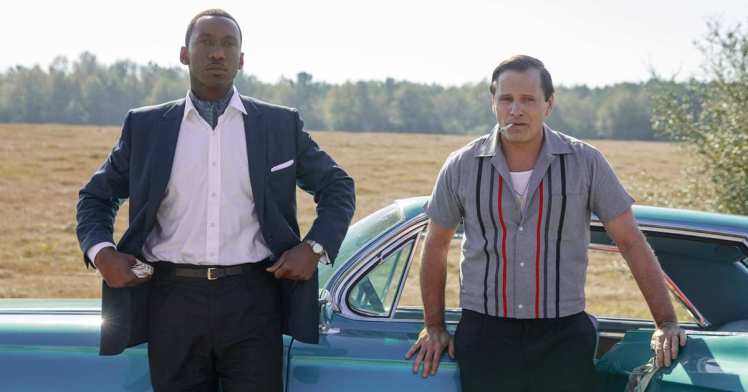 Viggo Mortenson and Mahershala Ali are amazing in this delightful movie about a hard-nosed Italian American chauffeuring an African American virtuoso through the Deep South for a concert tour in the early 1960s. First and foremost, the soundtrack is absolutely phenomenal, ranging from gorgeous classical piano tunes to popular songs of the era. While I expected the music to be great, I didn’t expect Green Book to be as funny as it is. I was laughing hysterically throughout it, and that’s not an exaggeration.

Mortenson’s portrayal of Tony “Tony Lip” Vallelonga is remarkable and unlike anything I’ve seen him do in his long, storied acting career. He’s slobbish, crude, and boorish, but undeniably charming and lovable, especially when he perfectly delivers a line that will have you falling out of your chair laughing. My favorite is when he looks around at one of the Green Book hotels and remarks “This place looks like my ass!” The way he says the line makes it feel like the character was stolen out of a Sopranos script. Fun fact: The real Tony Vallelonga played Carmine Lupertazzi in HBO’s hit mob drama series.

Let’s not forget about Mahershala Ali who, per usual, puts on a fantastic performance as pianist Don Shirley. While Mortenson brings the laughs, Ali is the one who comes through with some of the film’s most dramatic moments. There’s a particularly powerful scene where he demands Vallelonga pull over after the two get in an argument. Standing in the pouring rain, he spills his guts about how he was never accepted by white people because of his skin color, but also not accepted by his own people because of his privileged upbringing, which leads him to ask the question “Where do I belong?” It’s a tear-jerking moment that tells us more about Shirley and his inner struggles with identity.

Although people closest to Shirley have spoken out against Green Book for making his relationship with Vallelonga seem more meaningful than it really was, I still enjoy the bond forged between the two men. They’re from two completely different walks of life, but they’re able to set aside their differences, learn from one another, and develop an unlikely friendship. Sure, it’s cliché, but it’s also touching and uplifting. Call it corny all you’d like, but it’s the kind of stuff we need to see more of in times like these.

The Case Against Adnan Syed

I’ve been dying to watch Leaving Neverland, but because each part is the length of a long feature film, I haven’t gotten around to it. To fill my documentary void, I decided to start watching HBO’s recently released The Case Against Adnan Syed. As one of the few people on this planet who hasn’t listened to Serial, I went in with little knowledge of the details of this infamous and mysterious case. With two episodes released, I decided to catch up this week. To my dismay, I’m not feeling it, but I do see potential for the last two parts to make up for its slow start.

The first part was a total bore, spending a little over an hour giving background information on Hae Min Lee (the victim), Adnan Syed (the convicted), and their relationship instead of delving into the case. I understand that they wanted to provide some background information on the major players involved, but I feel like they spent too much time doing it. I almost lost interest, but decided to power through in hopes that it would become more captivating.

It did. Part two picks up the pace a bit, dissecting the testimony of key witness Jay Wilds. There are some pretty intriguing findings in this episode that make you question the credibility of Wilds’ deposition. Likewise, there are some additional discoveries that make you wonder if he may have been the one to kill Hae Min Lee, particularly the long rap sheet of crimes he’s accumulated since the murder. The episode ends with a nice cliffhanger that has me excited to watch the next part when it airs this weekend. Whatever the outcome, I’m hoping this documentary will help shed light on who actually killed Lee so justice can be served and closure can be brought to her friends and family.

Have you played, watched, or listened to any of the above? If so, what do you think? Is there anything you’re into this month that you’d like to recommend to me? Share in the comments!