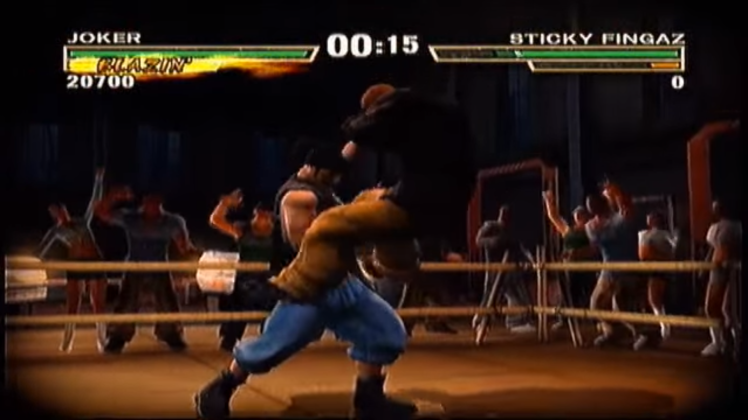 Who doesn’t love a good fighter? They’re games you can easily pick up and put down if you need to kill 30 minutes. Unless you’re competing professionally or playing on a hard difficulty, there isn’t much of a learning curve; just pick a character, study the move set, and beat the piss out of your opponents. Some series spice things up a bit by including tag and survival modes where four or more fighters square off against one another, but for the most part, two contenders enter the arena and one leaves victorious.

Because of the recent hype surrounding Tekken 7 and Injustice 2, I’ve been thinking about the fighting games I’ve played throughout my life and which have left a lasting impression on me. Moreover, I’ve been reminiscing on the ones I particularly enjoyed that didn’t get as much praise as they should have. These are the games that have been overshadowed by the Street Fighters, Mortal Kombats, and Soul Calibers of the world. These are the most underrated fighting games of all time.

It’s a game where you can fight a tyrannosaurus rex as a giant ape on a radiation-scarred Earth that has been cleverly renamed “Urth”. Need I say more? Aside from the novelty of seeing prehistoric beasts beat the crap out of each other, Primal Rage delivered cool arenas (my favorite being the Stonehenge-inspired Tomb), awesome and complex combo chaining, and great balancing to prevent infinites and cheap moves. I also love the human followers in the background that cheer for and worship you when you pull off a great combo, and weep when you receive damage.

With that being said, Primal Rage isn’t without flaws. Controls are clunky, it has too few characters, and some aspects of it are downright unpolished. For example, in addition to being unremarkable, some of the finishing moves look terrible. I remember one in particular where the opponent is supposed to be pounded into the ground, but you can still see their legs and feet. Also, the stop motion animation style makes it look cheap and cheesy, even for 90s standards.

However, even with these negatives, Primal Rage makes for an extremely entertaining fighting game. It’s available on pretty much every platform under the sun, so if you can score a copy of it, I highly suggest you get some friends together and embrace the ridiculousness.

Following up its classic predecessor was no small feat, but Killer Instinct 2 managed to capably do so. However, because it was an arcade-only release, it didn’t get much attention. A few months later, it was ported over to N64 as a version titled Killer Instinct Gold, but didn’t manage to sell many copies because of poor marketing. It’s a crying shame because the financial failure or Killer Instinct 2 and Gold ultimately resulted in the series dying until Iron Galaxy Studios resurrected it in 2013.

No matter how hard I try, I find it hard to pinpoint how this game is so underappreciated. From its over-the-top combos and gore to its wide variety of well-designed characters and stages, it offers just about anything you could ask for in a fighting game. Sure, it may have not been the best looking game of its time, but it made up for it with fluid controls and fun combinations. I also love the Team Battles that allow you to fight with up to 11 characters, Elimination Battles where you can only win by executing a Fatal, and Training and Advanced Training modes where you can refine your skills.

You can easily play Killer Instinct 2/Gold if you still own an N64, and it is also available on Xbox One via Rare Replay. Of course, there are PC emulators floating around if you don’t own either console.

If people judge games by box art quality, then I can understand why Fighter’s Destiny never received the praise and respect it deserves. For such a phenomenal and original game, it has one of the most boring and cheap looking covers of all time. The title is as generic as can be, too. I remember seeing it at my local video store when I was younger and avoiding it until I had nothing left to rent. When the time came to play it, I felt foolish for passing up on it so many times.

With its solid mechanics, unique point system, and Virtua Fighter-like visuals, Fighter’s Destiny became the definitive fighting game on N64 before the release of Super Smash Bros. Instead of simply draining your opponent’s health bar, the objective is to be the first to reach the set point limit through six different methods. What’s really impressive is how you can customize everything about the match – from the number of points needed to win to the amount of points earned for each action. This gives you the power to essentially create a completely different game with each match you play.

Additionally, Fighter’s Destiny presents you with a variety of game modes to keep you busy. Master Challenge allows you to earn extra moves through training, while Rodeo mode tests how long you can remain in the ring against a vicious cow. Its Survival and Time Attack modes also offer quite the challenge and are addicting when trying to improve upon your last attempt. If you’ve never played it, I highly suggest picking it up for N64 or finding an emulator for PC.

An innovative approach to 3D fighting games, Bushido Blade was a bold step away from the RPGs and adventure titles the world came to expect from Square. It was more than an attempt for the publisher to enter the fighter market; it was an experiment that introduced fresh ideas to the genre. Although you’re only given six characters to choose from, I love that you can choose from any of the game’s eight weapons, and that each is detailed with its own weight, length, and stats.

Unlike most fighters, combos aren’t a big focus in Bushido Blade. There is no health bar and one good strike to the head or chest can result in death, so patience is of the utmost importance. Instead of suffocating your opponent with a flurry of punches and kicks, combat revolves around keeping your guard and waiting for the perfect opportunity to attack. Best of all, you can strategically take out an opponent’s arms and legs to give yourself a physical advantage.

Perhaps the coolest aspect of Bushido Blade is its open arenas. Instead of being confined to a small space, you are free explore and interact with massive environments. In some cases, it’s actually beneficial for you run around a stage and try attacking your opponent from a different position. It also has a super fun game mode where you are placed in a hallway and challenged to fight 100 samurai without dying. It’s a great game that is worthy of playing, but it unfortunately hasn’t aged very well.

This may come as quite the surprise, but I think Def Jam: Fight for NY is the most underrated fighting game ever made, and perhaps one of the most criminally underrated games of all time. It mashed up two of my favorite things, hip hop and video games, and delivered one of the most robust experiences of its generation, period. The depth of its character creation was unprecedented for its time, allowing you to deck out your brawler in clothes and jewelry from real brands, and choose their fighting styles.

Additionally, its story mode is quite possibly the best of any fighting game I’ve ever played. It takes you on a journey through the seedy underground fighting scene of NYC and has you fight against and interact with famous personalities – from hip hop artists like Ghostface Killah and Ludacris to other celebrities like Henry Rollins and Danny Trejo. There are over 70 playable fighters, 27 venues, and five fighting styles, delivering a level of depth that I haven’t seen in a majority of games I’ve played.

Even with its insane depth, high level of customization, and excellent story mode, the core gameplay is where Def Jam: Fight for NY shines most. Combos are fluid and easy to pull off, you can pull off environmental attacks, and Blazins (special moves) are incredibly satisfying match finishers. The game is also super gritty and brutal. Most venues are dirty and dark, characters bleed all over the arena, and there are two game modes (Subway Match and Window Match) that are essentially fights to the death.

It’s truly a shame that such an amazing game was followed up by the stripped down, lackluster Def Jam: Icon. In the near future, I would love nothing more than to see an HD remake of Fight for NY, or better yet, a worthy follow up.

Do you agree or disagree with my choices? What fighting games do you think are underrated? Share your thoughts in the comment thread below!

9 thoughts on “5 Most Underrated Fighting Games Ever Made”